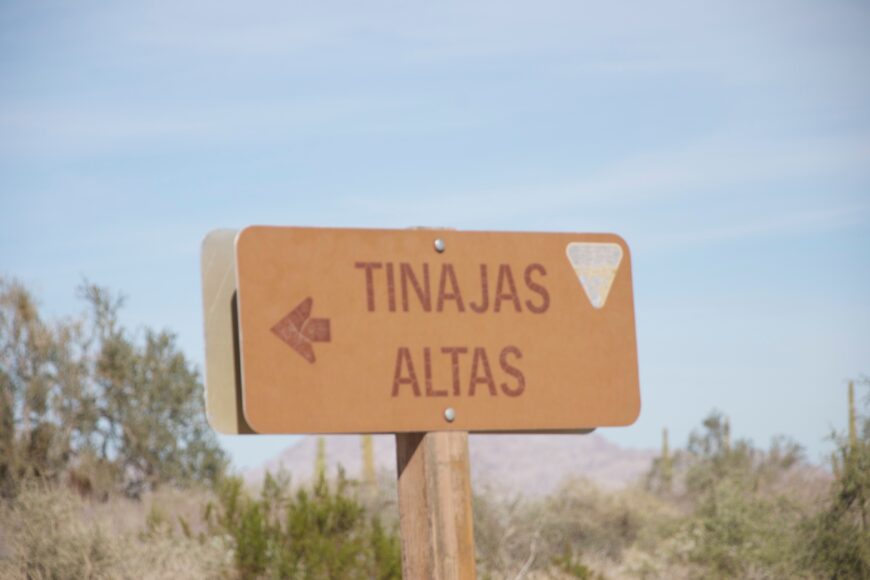 The day of the historical tour  for the Barry Goldwater Range, we were scheduled to meet at the Foothills. I usually get up pretty early but I have to say that is the quickest I have ever gotten ready for an off-road ride.

I had my emergency kit ready, I had food, water, and a shovel.    There was a pretty big crowd there waiting at the Foothills Shopping Center early in the morning, I made my way through the crowd to find Ms Carol Brooks to get filled in on what was going to happen.  The cost of the historic tour was $10 a person I payed the fee and filled out the forms they had for me there. They gave us a ribbon to tie on our antenna to use as markers to know we were a part of the tour. The tour guide Mark, gave us a little prep talk to let us know what direction we should go and what to expect.

We went to Dome Valley and had to meet them at an orchard. We finally got to the meeting place and followed the road. Our destination was past 20 miles down the road. I wondered how long we would travel and curious to what we would see.  I had not been on the Barry Goldwater Range I didn’t know what to expect.

We got to the Tinajas Altas (translates to HIGH TANKS). This was a place awesome different from what I expected it to be. The gorgeous Arizona desert I never knew was on the other side of the mountains. It was intriguing. We were transported through time by the stories told by  the tour guide.  Prehistoric man traveled that road the evidence is still there on the path. You could see the  holes left behind from people milling the corn or plants  also called milling stones slabs.

As  Mark began his historical tale he introduced 4 men who had come down from Mexicali, Baja California. They were there in honor of Eusebio Francisco Kino also known as Padre Kino. Padre Kino was was an Italian Roman Catholic priest who became famous and is well known in  northwestern Mexico and the southwesternUnited States (primarily northern Sonora and southern Arizona). These men were historians and part of a historical society of Mexicali, Baja California.

Mark (the guide) went on to guide us to the first tank. It was a natural water reservoir made out of rock. I had injured my foot and had bruised toes I could only climb have way to the second reservoir. There were pictographs under rocks.  It was awesome to get a away for a day to explore this beautiful landmark. You could see remnants of history still there. The view was amazing from the top of the boulders. It is one of the best tours I have been on. I encourage any one reading this to contact and sign up for their tours. Maybe you will discover a world you never knew existed.